"You want to change the rules? This is where you start." 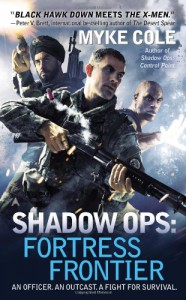 When it comes to nasty surprises, magic doesn’t discriminate.  As a paper pusher par excellence, Colonel Alan Bookbinder may not get the respect his position demands—as he admits, the military “didn't give Purple Hearts for paper cuts”— but since he gets to go home at night to his loving wife and darling kids, he figures that it’s more than a fair trade. Unfortunately for Bookbinder, his comfortable life has just ended: suddenly, he is able to feel the magical currents around him.  Like so many others, Bookbinder has come up Latent, which means his life is now effectively owned by the US military’s SOC (Supernatural Operations Corps). Hustled away from his family and transported to an alien world, Bookbinder has to figure out his magical talent, put his military training to work, and figure out how to handle his rather difficult colleagues, all while the whole world is falling apart.

Fortress Frontier is an interesting continuation of Shadow Ops: the timing overlaps with certain sections of the first book, but about half of the story is told from Bookbinder’s point of view. Whilst Britton spends much of his time in the first book struggling against the SOC, Bookbinder is very much a willing part of the system.  I felt that the last book was fueled by pure rage; this one, not so much. At the same time, Bookbinder is a far more likable character. This added an interesting dimension to the story because I think Britton is a complete ass yet generally agree with his politics, whilst I really like Bookbinder and still am morally opposed to the imperialistic regime that he supports.

As one might expect, Britton is still a major POV character in Fortress, and I found my previous dissatisfaction with the character congealing into pure dislike. Britton continues to claim that he can protect people, but when they get hurt or killed, he demands forgiveness, dodges blame, then reasserts control over whatever situation he has landed them in.  The responsibility for having destroyed peoples’ lives doesn’t give him the right to whatever pieces might still remain.  Honestly, I find his delusions rather terrifying. He repeatedly states that he’s “not going to let that happen,” as if he really believes that he can control the outcome. Basically, he’s an arrogant, self-justifying asshole.

"Who the hell put you in charge?" Tsunami asked.

"Fair doesn't enter into it, Oscar. You made choices. You are responsible for them."

"And you did that, at the price of Lord knows how many hundreds of others."

I pretty much agree with one character’s assessment of him:

"I've seen what you do. Whether you mean it or not, there are a lot of people dead because of you. I'll take my chances with the SOC."

Even stealing that student’s computer was an asshole move.  What if his dissertation had been on there?

Bookbinder, on the other hand, is the quintessential nerd; he believes that he has “all the leadership capability of a wet sock,” but when circumstances force him to take action, he shoulders the responsibility while still listening to those around him. I also enjoyed his self-deprecating humour.  One of my favorite scenes occurs after Bookbinder wakes up late in camp:

Bookbinder stood. "Why the hell didn't anyone wake me?"
"You looked peaceful, sir," Anan volunteered.

Bookbinder looked askance at Won, but the major only shrugged. "You did." [...]

Bookbinder nodded and shouldered his pack, sucking at his own water feed now. "Surely you must eat, sir," Dhatri said, his voice concerned.

"I can eat while we walk," Bookbinder replied. "We've lost enough time to my cherubic sleepy-time appearance."

In terms of secondary characters, I think Fortress is far stronger than Control Point.  Whilst some of the more frustrating characters still pop up—for example, I can never remember Downer’s given name, since “Debbie” seems to fit her personality so well— there are a host of new and entertaining personalities, and the new perspective brings humanity to some of the previously inhuman characters.  I think my favorites are probably Woon, a sarcastic and down-to-earth terramancer, and return character Crucible, who shows a whole new side of his personality to Bookbinder.

My favourite scene with Crucible is probably the one in which they are deciding who gets to go on the suicide mission:

"You're making it back, sir. You owe me."
Bookbinder cocked an eyebrow at him. "I owe you?"

"You want me to run this place so you can run off and play some combo game of diplomat-hero? Well, you can drive the big car, and I drive the little car. But this is a shit job, and you're just sticking me with it so you can have an adventure. The least you can do is write me a weekend pass and put me in for a commendation. Hell, maybe a letter to the promotion board. If you're dead, you won't be able to put in the paperwork. That would just be wrong."

Bookbinder snorted. "Yeah, I guess it would."

Oddly enough, one of the characters to get “humanized” was Harlequin, which I found to be very strange.  He actually goes through a moment in which he thinks, “and now you want me to commit murder,” which doesn’t really jive with his attitude in the last book.

The book also introduces some new dynamics in the magical world, including India’s Sahir Corps “Bandhav” relationship with the naga, and the nagas’ own tensions with the Agni danav.  I liked the complexity this added to the worldbuilding, although I had certain issues with the logic of some of the characters’ actions.

For one thing, what on earth was Bookbinder planning to do on the earth side without Portomancy to get him back? I wasn’t clear on what he was expecting, given that pissing off the naga basically destroyed any prospect of actually getting assistance back through their portal.

The next major logic fail, to my mind, was the whole Big Bear thing.  I never did figure it out: was his personality entirely fabricated? Whatever the case, the methods really don’t make sense:

"Fear of magic is so deep-seated in the American psyche that people will do almost anything to defend themselves from it. If you're going to unseat that,make public, open Latency a fact on the ground, you're going to need a dramatic event."

…what, so assassination of major government figures by magic is going to make everyone feel all secure and cozy about it all?

I also had a sneaking suspicion that the rules surrounding portomancy changed in this book—was Britton always forced to port between worlds? I thought not.

The anger and drive of the last book are more subdued here, but the issues of freedom versus security continue to emerge.  As one Latent notes,

"What do you expect us to do? Lie still and let you kill us, imprison us, strip us of our humanity? You've outlawed our existence. You provide no options."

Many of the issues I found compelling in the last book—the problems of jingoism and imperialism, for one thing—are not really discussed here.  Dehumanization and exoticism of certain groups within the narrative continues; for example, take a conversation in which some of the characters are trying to decide who to go to for help:

"The Apache have already committed so many atrocities on camera that people will never get behind them. The masks, the Mountain Gods. They're too... alien. People follow... you know, other people. People like them."

What, so the Apache are no longer “people”?

At the same time, I loved getting a glimpse of other countries’ attitudes towards magic; perhaps unsurprisingly, the U.S. was one of the most aggressive in militarization of magical forces.  As one speaker notes,

"Count on the US to do it completely wrong. [...] Firming up the walls for armories and combat outposts? Good use of Terramancy. Growing superfoods to feed the world? Threat to national security."

Overall, while I think the fury so tangible in Control is muted in Fortress, I think the stronger cast of characters more than made up for the difference. As for me, I've made the next book in the series my first summer purchase. I can't wait to find out what happens next.