"The life force of the planet was data." 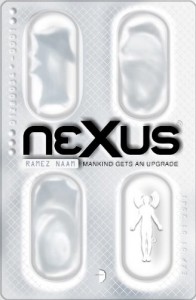 Transhuman – noun – A human being whose capabilities have been enhanced such that they now exceed normal human maxima in one or more important dimensions. An incremental step in human evolution.

Posthuman – noun – A being which has been so radically transformed by technology that it has gone beyond transhuman status and can no longer be considered human at all. Any member of a species which succeeds humans, whether having originated from humanity or not. The next major leap in human evolution.

Agent Samantha Catarenes has been sent to neutralize a serious threat to United States security: a grad student. As part of his neuro-computation lab work, Kaden Lane managed to unlock the brain-bending drug Nexus and reconfigure it so that it can turn a human brain into a programmable operating system capable of superhuman feats of calculation and communication.  According to the ERD (Emerging Risks Directorate), the newest branch of Homeland Security, this makes him an Emerging Technological Threat, and a danger to all of humanity. The government wants sole control over Kade's Nexus 5, but they also want Kade himself.  An upcoming neuroscience conference in Thailand will bring the brightest, most creative, most visionary--and, according to the US, the most dangerous--minds together. The ERD wants Kade to meet a Chinese scientist who may be more than human, and, if possible, to infiltrate her group.  And given the leverage the ERD has over Kade, it won't take much to force him to agree.

Nexus portrays a brave new world of new threats and new technologies, but it also bears a striking similarity to some of the darker moments in our history.  New technologies have ushered in new dangers, from increasingly adventurous (and untested) body modifications to the dreaded DWITY (Do What I Tell You) drug that mind-rapes victims into vapid submission.  In an effort to minimize these technological threats, the United States has started yet another war on an abstract noun, but this time, it's a War on Science.  In an ironic reversal, China has become the country of scientific freedom, whilst the U.S. is the land of censorship and oppression of its own, imprisoning its citizens without rule of law and limiting technological advancement in the name of national security.  The atmosphere is eerily reminiscent of the sixties, with ERD adopting the role of the FBI and the spectre of transhumanism substituted for the evils of communism.  One of my favourite quotes:

“Every attempt through history to limit the definition of humanity has been a prelude to the subjugation, degradation, and slaughter of innocents. Every one.”

The story explores the power of information, the two-edged sword of technology, and the dangers of valuing safety over freedom.  Nexus warns of a terrifyingly plausible future, a world where liberty has been sacrificed for security until, as Benjamin Franklin would have cautioned, neither remain. I find the Nexus drug, too, as thought-provoking as it is disturbing.  In our increasingly interconnected world, in which we share more and more of the trivia of our everyday lives, Nexus is the next logical step: a true meeting of the minds, a way to share every thought and emotion and experience directly with others. It would be all too easy to lose one's identity in such a world.

At the same time, I wonder if Naam's passion causes him to miss some of the nuances of the world he creates. As is clear from the outset, one of Naaz’s major arguments is that technology, combined with widespread dissemination, always leads to an improvement in social welfare. As one character says,

“It's just good for people to be smarter, to be more connected, to have access to more of each others' thoughts."

Naam dances tantalizingly close to the greyer areas, briefly touching upon the dangers of technological backdoors and terrifying drugs like DWITY, but he abandons these issues for one that can be more easily solved.  Naam's anti-Nexus perspective is mostly a hysterical over-reaction from--as the novel terms them--"knee-jerk prohibitionists.”  The pro-censorship arguments are mostly of the strawman variety, with determined agent Samantha Catarenes as the most senselessly reactionary strawman and of them all.  Sam and the ERD see Nexus as a threat to humanity because of its promise: they fear that it has so much potential for good that people will eagerly adopt it and, in doing so, make themselves something more than human.  To me, this is the flimsiest of straw arguments, but it is the one that Naam focuses upon.

I see the threat of Nexus as something quite different: as yet another way for the strong to gain control over the weak.  Naam treats wide distribution as equivalent to universal distribution, but examined more closely, distribution over the internet simply empowers the technological aristocracy.  No matter how many fine words it is festooned with, a technocracy is not the same as an egalitarian society.  One of the major issues of the book, and one aspect I really enjoyed, is the way in which the characters struggle with agency and choice.  As one character says to Kade,

"Are you wiser than humanity? All by yourself? Is it your place to choose?"

I found the straw argument quite silly, especially when it is actually articulated:

"That's not the problem," Holtzmann replied.

Holtzmann sighed. "The problem is that the utility is so high. People will find a thousand ways to use something like this. Communication. Entertainment. Mental health applications. Education. The potential is vast. Demand will be rampant."

Naam makes it quite clear that he sees the gains from technology as outweighing the tragedies:

"Imagine that you could show people a faster way," Ananda continued. "That in a year or two you could show them the basics of language, of literacy." Kade imagined. "Would you do it?" Ananda asked.

"Even though it would surely be used at times for profanity or vile speech?"

"Even though writing might be used to describe weapons that could be used to kill others?" Ananda asked.

I really loved some of Naam's arguments, even if I'm not entirely sure I agree.  I don't believe that a choice is free unless it is an informed one. Kade and his gang claim that they want to give people "options" rather than making choices for them, but I think that a wide release of Nexus would be making such a choice because it gives those with technological sophistication a great and terrible power over those without. Why do Kade and his fellow grad students have the right to make that choice? Worse still, no one involved has an informed choice: no one would know, for example, about the backdoors that Kade admits building into his code in the first few chapters of the novel. I found the story fascinating because in my opinion, there is no answer, yet each of the factions is convinced that they hold the moral high ground.

The most difficult issue with new technology is how easy it is to abuse, and sadly, this isn't an angle that Naam really explores.  Unfortunately, in my opinion, this led to a truly mindblowing level of hypocrisy in the book's outlook.

In the beginning of the novel, during Sam and Kade's confrontation, I was thrilled to see the issue come up:

"You have me under your thumb right now. You can make me do whatever you want. Rangan could too. That's coercion, Kade. You've built a coercion technology. A way to control people. And you tell me this isn't a weapon?"

Kade shook his head. "It's just a safety precaution. This is still experimental."

"Just a precaution, huh? Do other people have this back door in their heads? Can you paralyze any of your friends out in the party? Can you read their minds?"

Kade said nothing, just looked down at his hands.

"You can, can't you?" Sam continued. "Do they know? Have you told them that taking part in your little experiment hands you and Rangan the keys to their heads?"

Yet this issue is never really explored, and when Kade builds a backdoor that gives him absolute control over others, this is treated as a win for freedom rather than an act of utter despotism.  Leaving aside the chilling potential for abuse from any other unethical programmer who might access the code, I simply cannot get over the hypocrisy.  Kade is rightly horrified that the Americans have usurped Narong's agency, but when he "flexed his will" and takes over Narong's mind, he doesn't exactly ask permission either.  Personally, considering that it got him killed, I rather doubt that Narong would thank Kade for his self-righteous preemption.

Why are the tactics of domination and control that Naam so eloquently condemns somehow okay when the protagonists use them? For instance, take one of the story's "heroic" decisions (emphasis mine):

“I could just make her believe me, he realized. I could use one of the back doors… I could go into her mind and make her believe. No. He would not do that.  Not unless he had no other option. He had to draw a line.”

To me, that isn't a line; it's a corkscrew.  Considering that the protagonists believe it is acceptable to break the fundamental rules whenever they feel the moment demands it, why, exactly, are they so angry at the American government for doing the same?

One of the other major themes of the novel is the definition of humanity.  While I'm not particularly invested in that discussion, I loved the ways in which Naam explored reactionary governments and accepting religions, hive-minds and humanity.  A few of my favourite quotes:

"What if neuroscience proves that Buddhism is in some way incorrect?'

"'Well,' he replied, 'in that case we would need to change Buddhism.'"

"Laws that keep humanity chained and limited are ethical?" "They keep us human." Shu raised an eyebrow. "And who decides what's human?"

He'd been complicit in his own exploitation as a tool of evil.

I loved the issues that Naam explored, and I found myself fully immersed in the world he created.  Although I wish he'd tried to explore more facets of the issues he introduced, in some ways, I think the goal of the novel was to act as a strident caution against a disastrous future.  Sometimes, there is real value in a polemic, in a book that presents a clear argument for one viewpoint.  Even though I have some significant ideological differences with Naam, Nexus encouraged me to think critically about an issue I had never seriously considered, and that, after all, is one of the greatest gifts that a novel can give.