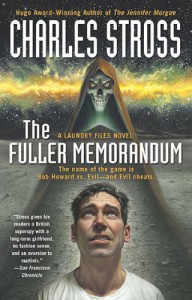 Have you ever seen the xkcd comic about regular expressions?

Basically, the plot of The Fuller Memorandum is this comic strip, but in novel form and with an invasion of Lovecraftian beasties.

I'm not sure if this book is a 5, or just a 5 by comparison--I've somehow hit a batch of not particularly fun reads lately. In either case, I recommend this read iff (if and only if) you fulfil the following preconditions:
--you like fantasy
--your sense of humour is slightly black around the edges
--you are a computer nerd.

The last is the most important. All urban fantasy books seem to use pop culture references heavily; in this case, all the jokes are math, computer science, and physics, from complexity theory to emacs to iphones (referred to as The JesusPhone) to recursion to Turing machines. For me, this was the first time I've ever read a UF novel and got all the jokes!

The plot: Bob Howard works at the Laundry, the top-secret magical police department in the UK, as a computational demonologist--think James Bond with a pocket protector, a desk job, and a gift for the occult. Other than constant incursions from Lovecraftian horrors, random cults (referred to by Bob as "the goatf*ckers"), and quite a few explosions, everything seems to be under control until Bob's boss disappears. Suddenly, Russian agents are everywhere, a mysterious occult object called The Teapot seems to have been taken, and Bob and his wife are under attack. It all looks like apocalypse has been rescheduled for quite a bit sooner, and Bob's one of the few people who can slow it down...

The story is fast-paced and often frenetic, with quite an enjoyable mystery component. To me, at least, it never quite left spoof territory, and if you're unfamiliar with James Bond and his ilk, Lovecraft, and a little background in math and computer science, I am not sure this is the greatest match for you. (I'm serious; two major plot points involve entanglement and dangling pointers.) The story is told in first-person present, and I really enjoyed Bob's wry, satirical narration. (I did wonder, however: why present tense? It's supposed to be a report for the Laundry. Who the heck ever tells a story in present tense in real life? I find it unnatural and quite irritating, but that's a minor detail in the overall story.) I liked, and could relate to, both Bob and his rather more terrifying wife, as well as his semi-sociopathic boss and his hyper-competent manager.

I've been told that the first novel in the series is a bit choppy, as it was written as a set of magazine short stories. I can attest that trying the third book out of context works fine, and it makes for a totally hilarious read.