Three trolls walk into a bar... 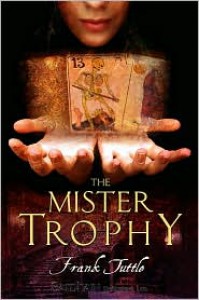 Frank Tuttle, I have a bone to pick with you. You need to put caution labels on your books:
"DANGER: CAN CAUSE UNCONTROLLED LAUGHTER IN PUBLIC."
I made the foolish decision to start The Mister Trophy while on the subway. I did manage to stifle my mirth to those almost silent single sniffs of amusement, but I had more trouble controlling the corners of my mouth, and the rest of the passengers started giving me worried looks. If I'd put a cap on the ground, they probably would have made charitable donations to the crazy girl smirking to herself. As it was, a child pointed at me and started whispering to his mother, and they promptly got out at the next stop. I could have tried to explain that it was all due to lines like:

[A troll, after attack by vampires] "Mister Jones...he is sorry. He meant to leave the half-dead creature able to answer to you for the insult to your house, but he fears he squashed it."

but I'm not sure it would have helped.

The Mister Trophy introduces us to Markhat's world, where a recent war between humans and trolls was won via vampire intervention on the humans' side; since then, the vampires appear to rule the human cities. As Markhat says,

"They won the War for us and promised to behave...They stay in their houses from sunup to sundown. We stay in ours after curfew. They don't break into our bedrooms at night and we don't spend our lunch breaks putting stakes between their ribs. It's worked so far."

Of course, when three Trolls stop by Markhat's office and hire him to retrieve the head of one of their ancestors from the trophy wall of a powerful vampire family, the sewer hits the windmill. Markhat has been hired because, as one of the Trolls informs him, if one of them went to talk to the vampires directly,

"'I would be honor-bound to slay all of the Haverlocks and a certain number of their kin. That would be--' the translator halted, struggling for words '--time consuming.'"

And as time is money, clearly putting a very fragile, squishy human right in the middle of the struggle between two implacable supernatural species will be the best way to clear it all up.

The Mister Trophy is very short--it's about the length of a standard short story--but a lot of fun. The writing is terse, with staccato sentences liberally mixed with comic dialogue. The writing is both breezy and efficient; despite having zero background on any of the characters, they felt very much alive to me. The entertaining mixture of hardboiled detective and full-fantasy world is reminiscent of Cook's Garrett (Sweet Silver Blues) and Bledsoe's Eddie Lacrosse (The Sword-Edged Blonde), but I found Markhat far more appealing than either. At the same time, I think the story could be improved by being fleshed out to a full novel. The basic plot feels a little disjointed, as the motivations of the various characters, as well as the consequences of their actions, are left mainly unexplained.
Why did the Trolls come back at this particular moment? And what about the magic? At what point did they decide to use it, other than to provide an incredibly convenient deus ex machina? How did Head Vampy figure out what was going on? Why were the other vampires joining in the fun? Etc, etc. I also totally fail to understand the "selling one's integrity" part. Markhat took on a job; he did it; he then apparently felt that the beings who contracted with him in good faith were trying to buy his honour and refused to take payment. Did he consider the "quest" a moral one and therefore did not want to sully it with monetary gain? Did he consider it an immoral one and decided that taking money would compound the folly? I have not a clue, and I remain unconvinced that Markhat (or Tuttle) thought much about it beyond the grand gesture aspect.
(show spoiler)  At other times, Markhat simultaneously tells us the rules of the world while explaining how they were broken.
[The Troll magic was the worst offender here. The Trolls have been using translators throughout, and Markhat and everyone else treat this as "normal." Close to the end of the story, we discover that magic is not only uncommon but taboo for Trolls, and that their use of translators alone should have been a shock.]
(show spoiler)  Like the Garret PI books, the plot also depends rather heavily on coincidence and deus ex machina, and a more fleshed-out plot might remove some of the sense of contrivance. All the same, the tidbits of worldbuilding we get are fascinating; like Garrett, Markhat is an ex-marine in a vicious war only recently ended. The regent of the kingdom appears to be hated by his subjects, and vampires hold power over human behaviour. Markhat's mysterious ally, Mama Hog, is entertaining enough that I'd like to see more of her, and I found Markhat himself sympathetic, engaging, and often hilarious. His delivery of lines is constantly amusing; for example, take the start of their desperate venture:

'We must go forth as one,' boomed Mister Smith.
'Our cause is just,' said Mister Chin.
'Our hearts are brave,' said Mister Jones.
'My ass is wet,' I said.

My only major complaint is that it is very, very short--more a short story than a novel, in my opinion.  On the positive side, they take about as long to read as a single subway ride.  If I take the plunge for the rest of the series, I have a feeling I'm going to spend quite a few more subway rides vainly attempting to hold back snorts of laughter. If I get locked into McLean on a 72-hour hold, I'm definitely blaming these books. I suppose it won't be too bad if they let me have my kindle in the psych ward.
moved-from-GR