"I'm like Avis rent-a-car: Because I'm insignificant, I try harder." 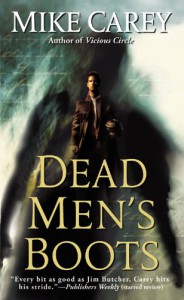 Felix "Fix" Castor, ex-exorcist and provider of "spiritual services" (no, he doesn't know what it means either) is having woman troubles, and not just romantic ones. Sure, after the events of Vicious Circle, Pen, his unrequited love interest, isn't speaking to him, and Juliet, demonic succubus and his unrequited lust interest, has a committed relationship with another woman, but he has far more problems than that. Pen has gotten him embroiled in a nasty court case over his demonically- possessed friend Rafi, all while trying to ignore his existence. Carla Gittings, widow of another exorcist, is being haunted by the angry geist of her late husband and has enlisted Fix's help. If that weren't enough, Fix has been hired by a distressed wife to prove that her husband didn't commit a murder--an extremely dead psychopathic American murderess did it instead. As I said. Woman troubles. As Fix begins to try to make sense of the situation, he begins to think that the cases are related and that Carla Gittings' husband may have stumbled into a horrific conspiracy of murder and possession. As Fix's involvement brings him to the attention of some of the most deadly antagonists he has yet faced, it's time to follow "The gospel according to Castor, Chapter 1, Verse 1: When in doubt, duck."

As always, Carey's book was a wild ride. I love Fix's wry voice, and the vivid writing and dialogue bring the characters and world to life. As always, I'm not sure this is a perfect fit for fans of The Dresden Files; not only are the world and tone much darker, but even the basic structure is somewhat different: Harry Dresden typically goes up against antagonists several power grades above him, but his formidable magical talents make him a serious threat. Fix has the same powers as any exorcist, but nothing more; only his determination, guile hero tendencies, and dependence on stronger allies allow him to make it through. As Fix himself says, "I'm like Avis rent-a-car: Because I'm insignificant, I try harder." The world itself is fascinating. Personally, I think that Castor is in the middle of the Rapture, and for once, the protagonist had nothing to do with bringing about the apocalypse. The mysteries beyond the grave come back to haunt the living, and society has no rules defining the interactions with the undead. Exorcists, as Fix once did, contend that the ghosts and zombies are nothing but echoes and that exterminating them is as benign as flipping off a radio. Some, like Fix's colleague Jemma-Jane Mullbridge, take advantage of the lack of guidelines to perform experiments on the undead that no ethical board would allow any living creature. A growing group of bright-eyed idealists have become activists who assert that both human rights and life itself continue "after breath". Fix Castor isn't sure what happens after death, and now carries a heavy weight of guilt from his past actions as a carefree exorcist. All of the supernatural beings in Fix's world, other than demons, are human in origin, so there are no easy and guilt-free salt'em-burn'em solutions as there are in most other urban fantasy series. In the end, every atrocity Fix encounters is inherently a human one, so the story repeatedly explores the lengths humans will go to retain some semblance of life.

Even the interactions with demons are an exploration of humanity. Juliet is now in a relationship, apparently in love with the bookish Susan Book. She seems as confused as the reader in understanding what this means, and I was intrigued by her attempts to construct a human identity and to rationalize her own past as a being repeatedly forced to use her sexuality to destroy others. Juliet's actions raised one aspect of the books that I had difficulty in describing coherently: the portrayal of women. The hardboiled/noir genre has a proud history of partitioning women into either "damsels in distress" or "femme fatales," but Carey goes one step farther, utilizing the gender divisions from the 19th century. All but one of the women in every single book (as far as I can recall) are repeatedly described as vibrant, animalistic, and ruled by their passions, while men base their actions on logic and calculation. The only individual to break the dichotomy is Jemma-Jane Mullbridge, and Castor actually describes her as "unfeminine" a few times. Personally, I think it's a generalization best left to the Victorian times. On a lighter note, Carey is one of the few writers in the genre who creates honest-to-goodness mystery stories, and I think this is his best so far; you'll figure out much of what is going on before Fix does, but it will take half the book instead of half a dozen pages. There is also an encore of one of the creepiest instances of a were-beast I've personally encountered...it might even make you look at all those internet kitty memes a little differently.

One of the formulas for naming your hardboiled/noir protagonist is to combine a mundane first name with a proper-noun-and-meaningful last-name. That's how you get Harry "the building was on fire and it wasn't my fault" Dresden, Alex "I see the the true future" Verus, James "Sandman Slim" Stark, etc. "Castor" is indeed apropos: castor oil is used therapeutically as a purgative, but it also happens to be a major source of ricin. Like his namesake, Fix starts out attempting to do good, but his presence is often disastrous for those around him. His given name and nickname have a certain irony: he is certainly not happy, his presence is rarely felicitous, and however hard he tries to fix all of the problems he sees, he is doomed to failure, at least in his assessment of himself. Fix Castor is a man drowning in his own guilt, submerged and isolated from the rest of humanity by his remorse and self-loathing. He walks the mean streets, dragging his crushing weight of guilt and self-hatred behind him, making every interaction into a hostile one because he fears that forming attachments will eventually lead him to fail someone else he cares about. Every single story that Fix has told about himself is a story of self-recrimination, from his childhood dealings with Katie to his failure to save Rafi. Every single story he tells us, including the major plot of each novel, ends with him blaming himself. Considering Fix as an unreliable narrator, this is an interesting effect: either Fix remembers all incidents in his life from the perspective of his own failings, or he is actively attempting to present himself negatively to the reader. In either case, it creates an oddly vulnerable, human, and ultimately likeable character, to be seen not as a lost, violent soul, but only as a hollow man.

Yet again, the most depressing aspect of the book for me was the isolation, which is in no small part created by Fix's shell of hostility. Fix has scant trust and even less respect for most of the people he encounters, and in the dingy world that Carey has created, it is difficult to blame him. After the last book, his friendship with Pen and Coldwood have practically disintegrated, and the events of the story put even his relationship with Juliet into jeopardy. As always, Fix and Nick are openly and aggressively hostile, with Fix going out of his way to antagonize the zombie; I can't comprehend why Nicky ever lets Castor through his doors, and I really don't understand why he continues to help. Yet as usual, Fix tries to be there for whoever leans on him, from Carla to Juliet to Pen. Yet again, he sees himself as failing them all.

Dead Men's Boots is a deeply satisfying story: a tightly plotted, entertaining mystery placed in an imaginative world that explores the boundaries of humanity and death. I can't wait to start the next book.

My review of The Devil You Know (Felix Castor #1)

My review of Thicker than Water (Felix Castor #4)

My review of The Naming of Beasts (Felix Castor #5)