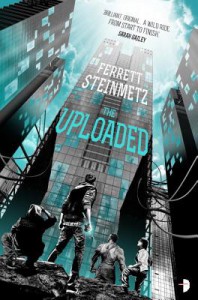 For Amichai and the rest of his world, it isn't this life that matters, but the Upterlife. In Steinmetz' near-future portrayal, the world has been transformed by a technology that uploads the minds of the dead into an eternal afterlife of quests and games and challenges and happiness. The living--those not wiped out by epidemics, plagues, and decreased life expectancy-- do the drudgework necessary to maintain the server farms while dreaming of their deaths and their Upterlives. Amichai has grown up in an orphanage, but his love of pranks and his interest in programming--banned for the living-- have put him at risk of losing his place in the Upterlife. When he is caught during his most recent prank involving a pony in a nursinghome, he finds himself at the start of a journey that uncovers the darkest secrets of the Upterlife and the living world that remains.

I absolutely adored Steinmetz' previous series, Flex , but unfortunately, Uploaded just didn't really work for me. I was fascinated by the world, which reminded me a bit of an Egan novel. As someone who has always been terrified by the concept of eternity, I am always intrigued by the idea of uploaded consciousnesses. As a programmer, I also was amused at the idea of programming being forbidden. However, all of the characters, including Amichai, felt one-dimensional and unsympathetic to me. We have the "Hero Geek," the "Best Friend," the "Best Friend's Hot Sister," and the "Beautiful Dangerous Cultist." I think the book is somewhat held back by its stereotypes: the young female characters that are controlled by their sexuality, the odd comments about Judaism, the "Magical Negro" vibe of the one African-American character, and the whole "NeoChristian" thing. One of the greatest strengths of speculative fiction is that you can use worldbuilding to create a complex metaphor to explore real world issues. So why create an obsessive, backward, death-worshipping cult and call it "Christian"? The use of that tired portrayal of Christianity is a bit of a pity because I found some of the commentary quite thoughtful, such as:

"Something in her needed to believe the world was like a bank-- you deposited in kindness and got it all back in the end."

It would be much more effective if separated from tired tropes.

I thought the problematic portrayal was exemplified by the "happy ending," where the NeoChristians are shoved off into reservations in New Mexico.

Overall, while the ideas of the novel are fascinating, the execution just didn't quite work for me. It could be that I'm just not the target audience-- I'm not a gamer and may simply have failed to recognize a lot of the in-jokes. While this didn't really hurt my enjoyment of Flex , I may simply have failed to "get" Uploaded.. I generally love quirky programming-imbued scifi, but this just doesn't quite have the insider geekery of Stross or Pratchett. If you're already a fan, then this is probably worth a try, but if you're new to Steinmetz as an author, I'd definitely recommend Flex as your first venture into Steinmetz' work.

I received an advanced reader copy of this ebook through Netgalley from the publisher, Angry Robot Books, in exchange for my (depressingly) honest review.