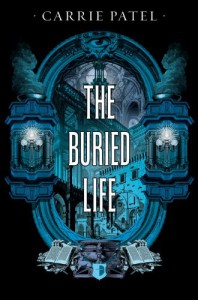 Their thoughts, for fear that if reveal'd

They would by other men be met

With blank indifference, or with blame reproved.”

Inspector Malone’s day isn’t starting out well.  Not only has she been landed with a new partner--a flamboyant ex-actor, no less-- but she’s just been called in on a perplexing new murder case.  Homicides may be everyday fare for the Metropolitan police force of Recoletta, but this case is something of an anomaly.  For one thing, the victim is a mild-mannered historian, and it is hard to imagine a less high-risk career.  For another, the victim was a whitenail--a member of Recoletta’s upper-class--and his death shatters the illusion of impervious privilege that the aristocracy holds so dear.

Centuries ago, shortly after the unspecified “Catastrophe” that destroyed the aboveground world, houses and streets were dug deep belowground, slowly crystallising into modern-day Recoletta.  The world of sunlight may not be dangerous these days, but a fondness for wilderness rambles is still considered an embarrassing-- even potentially scandalous-- peculiarity. Civilization may have been driven deep underground, but human nature remains the same.  Recoletta is run by the Council, a cabal of whitenails who hold absolute power over the city.  All but the most inoffensive of pre-Catastrophe books have been censored.  In this stifling, stultified atmosphere, the murder of an aristocrat is as risky as an open flame in a petroleum distillery.  As Malone will discover, the death of a whitenail is only the opening in what promises to be an explosive plot.

The Buried Life was an enjoyable read, lighthearted for the most part, and based around an interesting worldbuilding conception. The society has a Victorian flavour, but one of the greatest aspects of the dystopian future scenario is that the world can use bits and pieces from various cultures and time periods without ever triggering anachronism- driven irritations. I also really liked the idea of an underground civilization, and rather wished that the book had delved more into the stifling atmosphere.  What are the “streets” that the characters walk through actually like?  How tall are the tunnel ceilings?  I would have also loved to know more details of the Catastrophe and the origins of Recoletta itself; hopefully the next book will flesh out a few more of the details.  How did people create a world under the earth, and why?  How did they dig it out? And where did they put all the dislodged earth, anyway?

The characters, too, are reasonably likeable.  Other than the pair of investigators, the other major point-of-view character is Jane Lin, a rather naive seamstress who keeps accidentally stumbling into crime scenes.  I wasn’t particularly invested in Jane’s adventures, possibly because many of them involved her obsessions over a handsome and dangerous rake.  However, I quite adored the hard-eyed and unimaginative police officer and her theatrical partner.  With Malone as his straight-woman, Sundar manages to inject quite a bit of humour into the narrative.  For example, here’s Sundar’s rationale for joining the police force:

"I came from a four-year career in the theatre."

Malone's eyebrows shot up and her lips tightened. "Why the career change?"

Sundar stopped fidgeting. "Too much memorization. I'd gotten into it for the improv."

Or take an instance of Sundar’s investigative brilliance at work:

"He or she was strong and agile enough to overpower a seventy-year-old man. And right-handed. There were no hair fibers, snatches of clothing, or foreign materials on the corpse or at the scene which could help us identify the attacker."

"So it was a naked bald guy," Sundar said.

The playful humour is visible in other areas as well.  One of my favourite moments is when the seamstress Jane is introduced to three rather elderly high-society ladies with a tendency towards cutting (sorry, I had to) commentary: Lady Myra Lachesse, Madame Francine Attrop, and Madame Lucinda Clothoe.

Despite its whimsical Victorian veneer, Recoletta is a world of dark greys, in more ways than simply the literal one. As one character asks:,

"When there are no good guys, which bad guys do you choose?"

I'm sceptical of the Sato thing; they act like it is the top being replaced by the base, but it isn't.  Also, seriously, how could Sundar have died just like that? And how could Malone so easily sell out?

While the story begins as a routine mystery, it quickly develops into something else entirely, and the tone drops more and more often into a darker mood.  While I enjoyed this, I think the twistiness and cleverness of the actual detective aspect suffered somewhat from the shift, as it led to a certain amount of exposition and plot-motivated character stupidity.  All the same, I think the worldbuilding was my favourite aspect of the book.  You can't lose with Victoriana, and I loved the little unexplained details; for example, I'm betting the aristocracy are "whitenails" because they didn't have to dig. It's all the more fun for remaining unexplained. While the mystery is, in a sense, wrapped up in this book, the story itself doesn’t really draw to a conclusion, and instead seems to set the scene for the next book in the series. The story sets up a promising storyline and an interesting world, and I’ll be curious to see how the things develop in the city of Recoletta.

**NOTE: Quotations are taken from an uncorrected digital galley and are therefore provisional. Quotes will be corrected when the book is released.**

~~I received this ebook through NetGalley from the publisher, Angry Robot, in exchange for my honest review.~~