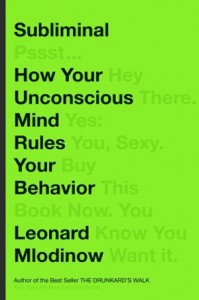 How Your Unconscious Mind Rules Your Behavior

When I first saw this book, I knew I had to read it. Not only is it written by an author I've already had a positive experience with (The Drunkard's Walk: How Randomness Rules Our Lives), but the book had one of the funniest cover designs I've seen all year. In black text on a green background, it says, "Subliminal: How Your Unconscious Mind Rules Your Behavior." In the spaces in between, in green only slightly lighter than the background, it says, "Psst: Hey There, Yes: You, Sexy. Buy This Book Now. You Know You Want It." I laughed when I saw it and obeyed--well, not to the point of buying it, but I did pick it up.

I dove in eagerly, only to be brought to an abrupt and unpleasant halt in the first chapter. There's nothing that irritates me more than bad science, and the misapplication of statistics is on my permanent hit list. One of Mlodinow's examples of the importance of the subconscious is (according to him) that we are more attracted to people who share our last name. As "evidence", he provides a chart of raw counts of husband-wife surnames over three states which indicates that a Jones is more likely to marry a Jones even though Smiths are more common. My problem? Well, this is a perfect example of Bad Statistics: he grabs a convenient weak correlation over a ridiculously tiny sample, ignores all potential confounding variables (e.g. names aren't uniformly distributed: even though the overall population of Jones are smaller, a Jones may be more likely to meet another Jones than a Smith; last names indicate ethnicity and nationality and we know people have strong homophilous preferences that have nothing to do with melodious surnames, etc, etc.), and then extrapolates an outrageously broad and demonstrably inaccurate causal conclusion (this data indicates that we are subconsciously attracted to people who share our names). I put the book down in disgust.

And so the story ends, until one day, I ran across a version of the book on audio, read by none other than Mlodinow himself. I decided to give the book one more chance. I'm glad I did.

Subliminal isn't deep or world-changing, but it is an interesting and engaging exploration of some of the most eye-catching experiments in social psychology. If you've read a lot of books in this genre, then you're probably familiar with at least 3/4 of the experiments Mlodinow discusses, but his entertaining writing makes up for familiarity. Mlodinow has discovered how to make his writing personal: he throws in self-deprecating stories, from the time his mother immediately jumped from a night her son forgot to call to the conviction that he was dead and his roommate had hidden the body, to stories of his own childhood attempts to understand the science of dating, to stories of himself being a dad.

Mlondinow also does a great job in choosing a variety of the "sexiest" psychological experiments, from Cliff Nass's research on personification of computers and construction of group identities out of nothing at all to Bertrand and Mullainathan's racial discrimination field experiment. (They sent out identical resumes to companies, changing only the names of the applicants to traditionally white or traditionally African-American names.) Mlodinow's focus was on showing two things: first, that the "new science" of technologies such as the fMRI has allowed us to truly create a science of the subconscious (an assertion that has come under fire recently, by the way), and second, how our own subconscious biases shape our behaviour in ways that we are completely oblivious to. He discusses how and why we stereotype, how we arrive at snap decisions, how our own senses and preconceptions shape our beliefs, how we judge first and rationalize later, and how we systematically overestimate our abilities and misinterpret our own behaviour. I wasn't fond of all of the studies he used--he goes into a digression into some of the (in my opinion) rather dubious and oversensational work into understanding human sexuality--but he certainly has compiled an entertaining list of the landmark experiments of modern psychology. Overall, it's an enjoyable read and a survey of some of the standout experiments in social psychology and neuroscience--a great place to go for an introduction to a fascinating new field.