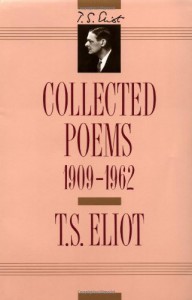 Recommended to Carly by: Me.

Recommended for: anyone in an emo-poetic mood (or lit people, but they've already read it)

In general, if there's some sort of sliding scale of poetic appreciation, I'm somewhere near -∞. The first forewarning of a couplet makes me cringe, and other than the subject matter, I can't really distinguish Longfellow from a limerick. One of my few--very few-- exceptions is T.S. Eliot. He embeds incredibly evocative phrases within a bewildering twisting medley of free verse. His poems use assonance and alliteration to twine disparate commonplaces with sudden poignant truths so that the whole is somehow imbued with the tones and significance of alien moods. This particular collection contains several gems that didn't make it into the various books of "selected poems."

Some of phrases from these excluded (if I remember correctly) poems:
"La Figlia Che Piange":

Weave, weave the sunlight in your hair
...
So he would have left
As the soul leaves the body torn and bruised,
As the mind deserts the body it has used.

Here I am, an old man in a dry month,
Being read to by a boy, waiting for rain.
...
These tears are shaken from the wrath-bearing tree.
...
With pungent sauces, multiply variety
In a wilderness of mirrors.

You lay upon your back, and waited;
You dozed, and watched the night revealing
The thousand sordid images
Of which your soul was constituted;
They flickered against the ceiling.

...
His soul stretched tight across the skies
That fade behind a city block,
Or trampled by insistent feet
At four and five and six o'clock;
And short square fingers stuffing pipes,
And evening newspapers, and eyes
Assured of certain certainties,
The conscience of a blackened street
Impatient to assume the world.

...
The notion of some infinitely gentle
Infinitely suffering thing.

[He] was much possessed by death
And saw the skull beneath the skin
...
He knew that thought clings round dead limbs
Tightening its lusts and luxuries.
...
No contact possible to flesh
Allayed the fever of the bone.