"The city of the second chance." 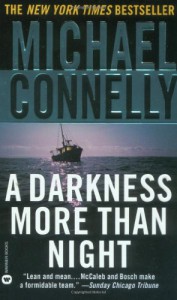 A Darkness More than Night

Recommended to Carly by: curiosity. It also kills cats.

The gang's all here: during a highly publicised case in which Harry Bosch, troubled detective of the LAPD, is a primary witness, Terry McCaleb starts uncovering some disconcerting facts and Jack McEvoy lurks around in the background, digging up dirt and stirring the mud. Long story short: Terry McCaleb, Harry Bosch and Jack McEvoy (each a protagonist of his own series) all compete to see who's the biggest bastard. I'm not really sure who won.

The plot is entertaining, if improbable, and it was interesting seeing each character from each others' perspectives. The conflicts and interactions between the characters as they pit their wits against each other are well-written, and the moral ambiguities make it difficult to choose sides. However, this doesn't stand out to me as one of the top-notch books in the--well, actually, in any of the three--series.

Out of the three characters here, I think Bosch is my favorite. McEvoy has only a cameo role, and I somehow have real difficulty warming to the self-assured and self-righteous McCaleb. Bosch, as a character, is rich and complex, and remains a strong draw for me throughout the series. I love the fact that he constantly sees his mistakes and evaluates his own error. However, I strongly dislike the fact that his character never develops and remains static throughout. Time and time again, Bosch sees how his self-righteous ruthless independence, his cowboy justice, can do irreparable harm to others. Yet he never changes. It is difficult to even comprehend how a man apparently so aware of his failures can continue to make the same mistakes time and time again.

The other element I find problematic is the side characters. No matter which series you're in, Connelly never develops a coterie of loyal sidekicks for the character. In fact, I'm rather sure that the probability of a character betrayal increases exponentially each time the character appears. Connelly tends to never leave his characters in healthy platonic relationships; they might have one all-consuming and hopeful-looking romantic relationship on the table, but it's guaranteed to dissolve by the next book. Bosch's love interests, in particular, never seem to make it through more than a single book before they are discarded and the next one is pulled off the assembly line. It all goes to create an odd, unsettling, and isolating feeling: you can never trust the side characters, because the next book, they'll probably end up as the murderers, or possibly just the murderees. As someone who identifies mainly with side characters, I think it gives the books an unstable feeling, a lack of solidity that other long-running series develop.

Connelly spent about 12 years on the crime beat, so his description of the police world is thorough, accurate, and natural. It's one of the highlights of the books for me. At the same time, every single book I've read contains incredible corruption within the police department, yet Internal Affairs and similar are vilified. Defence attorneys are also portrayed as immoral and sleazy. This seems hypocritical to me. If the police system is truly so decadent, then there must be ways to watch the watchers. It always leaves me wondering what on earth IAD did to Connelly during his writing career.

What keeps bringing me back to these books is the underlying depth. In an interview, Connelly commented that he writes books to try to tease out answers to the questions and problems that plague his own spirit. Again and again, Connelly tackles Nietzsche's question of how the hunter of monsters can himself become that which he fights. There are no satisfying, complete answers to these questions, merely conflicting answers to their various facets. Yet at the same time, one would hope that a character who struggles with these issues, and who seems to come to some peace or enlightenment at the end of each book, would be able to progress. Instead, in each subsequent book, we find Bosch and McCaleb and McEvoy exactly where we found them. Despite all this, I think Connelly's books, especially the early Bosch books, are well worth reading. His exploration of these topics leave me ruminating on my own beliefs, prejudices, and choices. Overall, these deeper topics lend Connelly's books a power and depth that is rare in the noir genre.

*the overview comments were ripped and partially expanded from one of my other reviews of the Bosch books.
detective-hb-noir mystery police-procedural