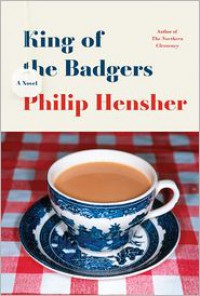 King of the Badgers: A Novel

Let me start by saying that my rating reflects my personal experience: this may indeed be fantastic literature; it just wasn't a good fit for me. Before I go into why, an attempt to help match the book to the audience: I think you will enjoy this book if you liked The Sound and the Fury (this is more towards dark humour, but has some similar themes), Middlemarch: A Study of Provincial Life (although this is, instead, a rather more mysanthropic portrait of semi-suburban life), A Spot of Bother, or (perhaps somewhat oddly) Wicked: The Life and Times of the Wicked Witch of the West (this has the same dark humour and bleak portrait of humanity.) Unfortunately, I didn't like any of these books, and, except for Middlemarch, for a single reason: I just couldn't cope with the authors' portraits of the human race as inherently shallow, self-serving, vicious, and essentially hopeless.

I could not go on living if I believed that Hensher's portrait truly reflected the world. I found the book incredibly difficult to get through because literally every single character is sickeningly superficial and selfish, slowly plunging into depression because of their own self-serving actions. I think the overall tone was supposed to come off as (dark) humour, but I felt instead as if Hensher openly despised all of his characters. To get some idea, take a Jane Austen novel, defenestrate the protagonists, remove every character with a shadow of compassion or kindness, rip out the narrator's moral sensibilities and compassion, and sharpen the humour into a poisoned dagger. Now we're getting close to King of the Badgers.

I was incensed by the heavy dependence on stereotypes in creating the characters. In Hensher's world:
--Upper-middle-class villagers are uniformly shallow, selfish, and corpulent, and cannot be mentioned without a sneering adjective or two.
--Being lower-class implies you are uneducated, grasping, and willing to do anything, up to and including selling your children, of which you of course have a positive profusion, to get hold of money.
--Being gay implies that you participate in wild orgies with illegal substances, provocative costumes, and mass nudity and group sex. (Obviously! Because clearly homosexuality totally removes all inhibitions and moral consciousness...what is this, the fifties?)

There's more; I just can't disentangle my horror and disbelief at the creation of such hateful stereotypes. This isn't Rent. It doesn't portray alternate lifestyles in a sympathetic way to help outsiders to that world understand. I felt that every description of his characters' lives and thoughts carried a sneer from the author.

The book itself centres on a small town on the river which superficially appears to provide a taste of English country life but is in truth as shallow and false as its populace. The story is divided into three parts. The first is a cynical tale of the public and family actions when a child disappears from a lower-class home. The second tells the story of an obese, unhappy, gay man and his struggles to escape being an outsider. The third returns to the village and weaves several of the previous threads together.

I thought that the book did a splendid job of creating a pleasant, parochial village town, then stripping away its superficial front to display its cheap and tawdry internals. There are some brilliant metaphors that run throughout the book, such as the Neighbourhood Watch and their obsession with catching everything on camera. But this wasn't a good fit for me. The portrayal of all the gay characters as flashy-dressing sex-crazed druggies really bothered me, as did the author's patronizing contempt of his characters. Even more problematically for me, in the entire 400-some pages, the characters never undergo any self-realization; in the end, they are as selfish and shallow as they were at the beginning, and the author appears to despise them just as much. There isn't much of an overall plot, except to detail the failings, falsities, bigotry, and boorishness of every member of the village. Overall, this just wasn't my type of book, and it left me depressed and with a bad taste in my mouth. If you like very dark, misanthropic humour--something like The League of Gentlemen-- and can cope with the complete absence of any protagonist or moral centre, this might be worth a try.

Note: I received this book through the Goodreads Giveaway program.