"Tonight we rise as one and change the world!" 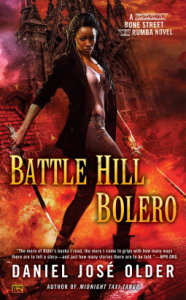 Bone Street Rumba. Half-Resurrection Blues. Midnight Taxi Tango. Battle Hill Bolero. From the titles alone, it's clear how important an influence music is on Older, and his love of rhythm and texture can be felt through the pages. Sure, it's a story about ghosts and humans duking it out against supernatural monsters, but for me, the series is just as much about New York City, the backstreets and communities that half-dead Carlos Delacruz and his full-ghost and human friends inhabit, from the juxtaposition of layered history in the ghost world to creeping gentrification to chatty santeros to the clash of cultures on the city streets. In Battle Hill Bolero, the story really picks up its tempo.

If you've read my reviews before, you probably know I'm somewhat cavalier about series order-- even in this case, I started with Midnight Taxi Tango (#2) and only recently went back to read Half-Resurrection Blues (#1). So please take my word for it when I say that this book simply won't work without the previous two in the series. (In fact, that realization, which occurred within the first chapter of this book, is the reason why I went back to read the first book.) Any discussion of the plot necessarily involves spoilers for the previous books, so consider yourself warned.

After the slow buildup in the previous books in the series, the rebellion against the Council has finally reached boiling point. After a host of mutual misunderstandings, Carlos and Sasha are finally trying to work things out, complicated by the revolution exploding around them. Battle Hill Bolero is chock-full of battlescenes, and some of them are pretty awesome. However, I did find it surprising that, given the series' focus on exploring the humanity of the other characters, there was so little concern for the sanctity of the lives (or unlives, as the case may be) of the adversaries. This is a civil war that pits friend against friend and coworker against coworker. How did the fight against the Council become a fight against a faceless enemy? I also don't tend to find plotting to be Older's strong point, and this book was no exception. I never really understand why the antagonists--and some of the protagonists-- do what they do; their often contradictory actions seem to serve only the plot.

One thing that drove me slightly nuts was Carlos's entirely inconsistent status as secret rebel. At one moment, they're looking for a traitor; at another, he's going out to a bar with them; at another, they offer him a job; at another, they're attacking his house. It was logically inconsistent and didn't even really drive the plot. The ngks were another issue. While it was gratifying to see all the pieces of the previous books come together, I have no clue how or why they got involved, and why anyone thought it was a good idea to employ the magical equivalent of a nuclear attack. And while it was interesting to finally find out what happened at Carlos's death, it was sort of a letdown. Honestly, the whole "murder their whole families" thing still makes no sense to me, particularly given that Carlos and Sasha had no idea who they were in their previous lives anyway. But the biggest issue was, of course, Flores. Other than to drive the plot, what was the motivation for all the insane actions he took, from sending them to the Web to starting a war against them to bringing in Caitlin? He was basically a plot device, and a shallow one at that.

I'm drawn to these books because of the vivid glimpses of New York that Older gives us, and the diverse characters, not because of the plot or action scenes. And I absolutely loved some of the characters introduced here, from Kris the take-no-prisoners ghost to Red, a transgender pirate whose spunky spirit outlived his body by centuries, as well as old friends from previous books. And then there's the sheer love of language that imbues the story, and the sly situational humor that is such an integral part of urban fantasy. For example:

"Meetings are Satan's way of balancing out all the beautiful things in the world, like music."

We even get an enjoyable cameo from Shadowshaper as well as a few hints about the next mythological entities Carlos and the gang will encounter. Battle Hill Bolero is a watershed book for the series. It absolutely cannot be read without the other books in the series, for the plot is filled with an unexpected but gratifying symmetry. I'm not sure where Older will take the series next, but I'm definitely in for the ride.

~~I received this ebook through Netgalley from the publisher, Berkley Publishing Group, in exchange for my honest review. Quotes were taken from an advanced reader copy and while they may not reflect the final phrasing, I believe they speak to the spirit of the novel as a whole.~~