The Best Science Fiction and Fantasy of the Year, Vol 10 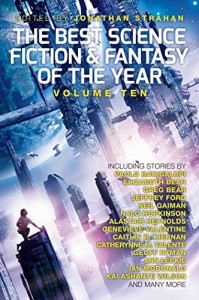 I've been a fan of Strahan's "Year's Best" collections for years. He has a great eye for memorable stories, and the tenth volume is no exception. So what was last year in SFF like? As one might expect, Strahan's introduction included a few mentions of the "Sad Puppies" Hugo controversy, but despite the push for "traditional" SFF of adventurous derring-do, Strahan's collection contains a satisfying variety of thoughtful examinations of social issues as well as a few pure chilling tales and rip-roaring adventures.

My favourite variety of short story is the one where the twist is like a punch in the gut, and where the story haunts you long after you close the book. "Little Sisters" by Vonda N. Mcintyre is easily one of the most chilling, eerie stories in the entire collection. It is [trigger warning] about rape, and defilement, and child custody, but all in an utterly alien context, and all told from the perspective of a gender and sexuality utterly foreign to our own. Yet the sheer alienness also makes it distressingly, effectively visceral.

Equally unique was "Kaiju Maximus: 'So Various, So Beautiful, So New'" by Kai Ashante Williams. It takes place in a future where superhuman Heroes fight endlessly against alien forces, told from the perspective of a camp follower. It's an interesting vision of the superhero dynamic and the ways in which someone with superhuman abilities can all too quickly become inhuman, and it's all the more fascinating because of the underlying gender dynamics: the great Hero is female and the camp follower is male. Alyssa Wong's "Hungry Daughters of Starving Mothers" is one of the most thoroughly creepy short stories I've encountered for a while. It involves vampirelike creatures--possibly Jiangshi, but I'm not sure-- who thrive on the consumption of evil thoughts. They also keep the spares in jars. Totally creepy, but it's also a coming-of-age story about sexuality and mother-daughter relationships.

The common theme that stood out most to me was that of emergent consciousness. While the idea certainly has appeared before, this year, it felt almost omnipresent, taking the place of the previous year's focus on surveillance societies. I couldn't help but wonder if AlphaGo and similar breakthroughs influenced the writers or Strahan himself. Apart from the previously-mentioned "Little Sisters," quite a few stories played with the theme of a post-AI-ascended future, including Kelly Link's "The Game of Smash and Recovery", Geoff Ryman's "Capitalism in the 22nd Century or AIR", and Gwyneth Jones' "Emergence". Several explored themes of slavery, agency, and free will in such a future. Most memorably, Nalo Hopkinson and Nisi Shawl's "Jamaica Ginger" is a poignant steampunk story of an alternate nineteenth-century New Orleans. It uses the replacement of Pullman porters with AI robots to draw parallels to racism and slavery, and as I'd recently read a book that dealt with this history, I found the story particularly memorable.

Strahan's SFF collections tend to define the genre quite broadly, and quite a few of the stories here could fit quite neatly into the horror genre. Tamsyn Muir's "The Deepwater Bride" is an entertaining take on the coming of a thonic Lovecraftian monster told from a teenage perspective. It boasts one of the best opening lines I've ever encountered:

"In the time of our crawling Night Lord's ascendancy, foretold by exodus of starlight into his sucking astral wounds, I turned sixteen and received Barbie's Dream Car."

"The Lily and the Horn" by Catherynn M. Valente is perhaps the first Valente story that I thoroughly enjoyed and wins the award as one of the creepiest love stories I've ever read. Lush, lyrical writing introduces us to a world where wars are fought with poison and treachery over the dinner tables. "A Murmuration" by Alastair Reynolds is a brilliant work of psychological horror and a perfect portrait of academic insanity. My favourite quotable quote:

"I squeeze our data until it bleeds science."

Neil Gaiman's "Black Dog," which opens the collection, combines American Gods-style worldbuilding with an atmospheric and foreboding take on the traditional village ghost story. Not all these horror-type stories worked for me, however: honestly, I wasn't sure what to make of Jeffrey Ford's "The Winter Wraith". A pseudo-horror story about a Christmas tree feels too ridiculous to be intended as anything but silly, but I didn't find it particularly funny, either.

Several stories took current political concerns to a possible conclusion. "Oral Argument" by Kim Stanley Robinson is easily my favourite KSR story I've read. Told as excerpts from a court case by an extremely snarky witness, it's short, sweet, and with a vastly entertaining punchline. Paolo Bacigalupi's "City of Ash" is a vignette that takes place in a post-apocalyptic world of extreme water scarcity, possibly the same world as The Water Knife. Sam J. Miller's "Calved"is a poignant story of a father and his estranged son trying to come to terms in an ever-changing, post-US-collapsed world, but it's also about race and acceptance and prejudice and, most of all, entitlement. As the protagonist puts it:

"Shielded by willful blindness and complex interlocking institutions of privilege, we mistook our uniqueness for universality."

Sam J. Miller's other story in the collection, "The Ghosts of Home," is an imaginative take on the bank foreclosing catastrophe. While I didn't care much for the story's romance, several quotes were satisfyingly memorable:

"Agnes had made mistakes before. [...] One thing was always true, though: She knew they were mistakes before she made them. She decided to make a mistake and that's what she did. The hard part was figuring out the right mistake to make."

"Another Word for World" by Ann Leckie is a brilliant and amusing examination of language and the way it shapes our preconceptions. Thematically, it reminded me tremendously of C.J. Cherryh's Foreigner. Ian Mcdonald's "Botanica Veneris: Thirteen Papercuts by Ida Countess Rathangan" is a very direct transference of the late nineteenth century imperialistic mentality to Venus, complete with teeth-grinding jingoism and grating "Great White Hunter"-type adventures. It's fun, but has the sort of jarring disconnect one gets when reading Kipling.

A few of the stories didn't fall under any unifying theme."The Heart's Filthy Lesson" by Elizabeth Bear is a thoroughly enjoyable gem that takes us to a distant planet where a scientist named Dharthi, preoccupied by a one-sided rivalry with her all-too-perfect lover, sets off on a dangerous scientific quest. Not only did the story show off Bear's lushly creative worldbuilding, but it also featured swamp tigers--definitely a win. Genevieve Valentine's "Blood, Ash, Brains" paints a vivid picture of the "Nachthexen" (Night Witches), with a little real witchcraft thrown in for good measure. Greg Bear's "The Machine Starts" is a trippy, brain-bending multiverse jaunt. "The Pauper Prince and the Eucalyptus Jinn" by Usman T Malik is one of the longer stories in the collection and fuses ancient myth with a man's relationship with his cultural history.

As always, there were a few stories that didn't quite hit me.Caitlyn R. Kiernan's "Dancy vs. the Pterosaur" centers primarily around the main character's interaction with a rigid evangelical in a post-apocalyptic world. It feels rather like a glimpse into a larger saga, and while I found the worldbuilding interesting, the religious discussion isn't what I'd call thought-provoking or illuminating. While I think I"Drones" by Simon Ings was a bit too weird for me. In Ings' future, a random disease manages to kill off most of the women and all of the bees, leaving a future world where a very few men have harems and the rest are the titular drones. I found it all too illogical and too much like a fifties throwback to be able to get into the story. While I generally love Robert Reed, his "The Empress in her Glory", which tells the story of a blogger who gains power because her predictions are made true by conquering aliens, just didn't quite grab me. Kelly Robson's "The Waters of Versailles," a magic-and-manners alternate history of Roi-Solei France, is one of the longest stories in the book, but I found the protagonist so utterly unsympathetic that it was hard to be interested in his story. "The Karen Joy Fowler Book Club" by Nike Sulway earns the prize as my least favourite story in the book. It mixes real people (e.g. Karen Joy Fowler) with utterly un-thought-out anthropomorphic rhinoceri who make tea (with what arms?), shop on ebay (with what fingers?), garden, build houses, read and write books, drive up driveways, and make bread (how?); their actual rhinocerosness is apparently restricted only to the word and to their grey skin. Personally I can't even picture a rhinoceros gardening or typing on a computer, and I don't think the author even thought far enough into her utterly superficial worldbuilding to consider it. Such slipshod thinking infuriated me far too much to allow me to enjoy whatever the story was supposed to be about.

Despite a few stories that didn't grab me, Strahan continues to demonstrate his gift for creating eclectic, interesting collections that capture the spirit of the year. His collections tend to include many familiar names, but usually include a few new authors as well. If you're looking to widen your SFF perspective, I highly recommend picking up one of Strahan's Year's Best.

~~I received an advanced reader copy of this ebook from the publisher, Rebellion/Solaris, in exchange for my honest review. Thanks!~~